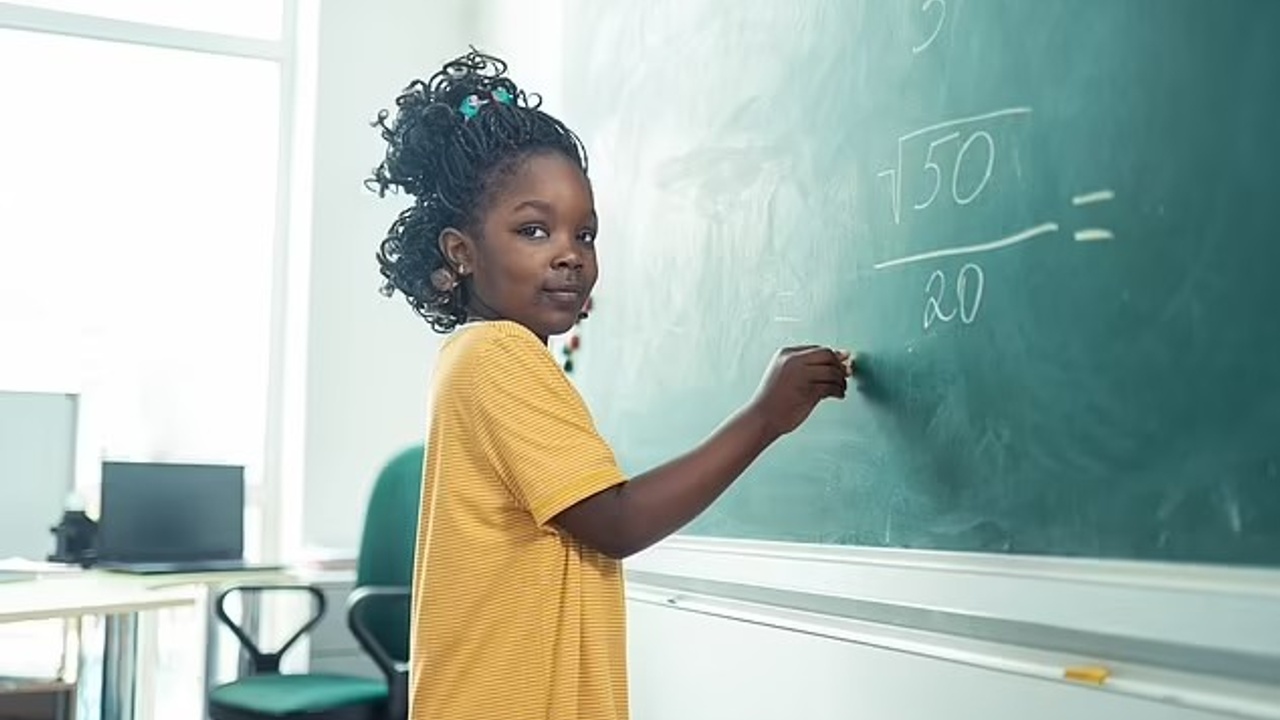 So far, the workbook is being used by school districts in Georgia, Ohio, California and Oregon, according to education news site The 74 Million.

It's part of a larger push nationwide to have students learn about critical race theory, which teaches that racism against minorities is embedded in every aspect of life - even in something as seemingly cut-and-dry as math.

But many critics of the workbook say it actually reinforces negative stereotypes and drives wedges between students according to their race.

'The workbook's ultimate message is clear: Black kids are bad at math, so why don't we just excuse them from really learning it,' Erec Smith, a professor of rhetoric and composition at York College of Pennsylvania and co-founder of Free Black Thought, told The 74 Million.

Despite its use by districts in California, state board members recently voted against using it in the redesign of the state's math curriculum.

And while The 74 Million reported that Georgia schools have used it in, the state's board of education recently passed a resolution banning critical race theory from being taught in its schools.

Supporters of critical race theory say it helps illuminate the obstacles faced by BIPOC (black, indigenous and people of color) individuals in every aspect of life, including the classroom, which their white counterparts do not have to worry about.

But critics claim it is unnecessarily divisive, and teaches children that they are either victims or oppressors from an early age.

Meanwhile, the Oregon Department of Education hosted a seminar on antiracism in education in February, which featured the controversial math workbook.

'The concept of mathematics being purely objective is unequivocally false,' reads the manual. 'Upholding the idea that there are always right and wrong answers perpetuates "objectivity." '

Instead, it encourages teachers to have more than one answer for math problems, refrain from calling on students to answer problems for the class, relate math to minority students' experiences and provide examples of how math is used by political revolutionaries.

'Identify and challenge the ways that math is used to uphold capitalist, imperialist, and racist views.' The workbook reads.

'Math enjoyed this notion that it was somehow above the influence of the cultural and political issues of our time,' Rachel Ruffalo, the director of educator engagement at The Education Trust-West, told The 74 Million.

'We live in a toxic culture that affects us all; one dynamic of the culture is that we are discouraged from seeing it,' reads a stand-out introduction to the book. 'One of our tasks is to learn to see our culture and how it teaches us to make normal that which is not and should never be normal.'

Williamson Evers, who worked for the U.S. Department of Education under George W. Bush, wrote an article in the Wall Street Journal after the workbook started trending among educators in California, shortly before state board members recommended nixing it.

If adapted into curriculum, Evers said that it would discourage students from succeeding in math class and put them behind students in other countries.

'If California education officials have their way, generations of students may not know how to calculate an apartment's square footage or the area of a farm field, but the 'mathematics' of political agitation and organizing will be second nature to them,' he wrote.

But even proponents of teaching antiracism have said that the book contradicts the very ideas it's trying to promote.

'It claims to be about teaching math while founded on shielding students from the requirement to actually do it,' he wrote. 'Humans may sacrifice the black kid from the work of mastering the gift of math, in favor of showing that they are enlightened enough to understand that her life may be affected by racism and that therefore she should be shielded from anything that is a genuine challenge . . . this is not pedagogy; it is preaching.'

David Barnes, the associate executive director of the National Council of Teachers of Mathematics, also shared reservations about the workbook.

'Are we building bridges or throwing grenades?' he asked. 'When you get to page two and what's bolded is "dismantling white supremacy," there are some people that cannot read past that.'

But supporters of the workbook say that its message is being taken out of context.

They argue that its teachings are more about making math more relatable and understandable to every student in the classroom.

Josie McSpadden, a spokeswoman at the Gates Foundation, defended the project in an interview with The 74 Million.

'At times, research has shown that racial bias and student mindsets can affect student academic achievement,' she said, adding the workbook, 'highlights a critical discussion — how students arrive at answers and demonstrate their understanding and conceptual grasp of important math concepts.'